A small, colorful village in Provence offers you all the advantages of a private city combining security, privacy and friendliness in a site created for boat lovers...

The Boutemy Real Estate team will give you the keys to this paradise.

This paradise is of course Port Grimaud! Port Grimaud, often referred to as the "Provencal Venice", is a private lakeside city located in the heart of the Gulf of Saint-Tropez, France. It is located in the municipality of Grimaud, in the Department of Var.

For its inhabitants, Port Grimaud is heaven on earth. The dream of a lifetime for others. It is only by spending at least a few days in Port Grimaud, with a view of its canals that one can understand this.

Port Grimaud was conceived, designed and built by François Spoerry, a Mulhousian architect who loved the sea. In 1962, the latter acquired the marshland on which he built the lakeside city perfectly accustomed to the Mediterranean environment. The building permit was issued on June 14, 1966, the founding date that gave its name to the first place built, the "Place du 14-Juin". From July 1967 the first houses were completed and life in Port Grimaud could begin. The construction was completed in the early 2000 years.

Thus, a lakeside village was born facing the sea, with its colorful facades and Roman tiles, its small alleys with whimsical paths that follow the winds or the sun, a place where each house is connected by land access and by a dock where you can moor your boat: a living city with its church, its shops and its services (including a post office).

Since 2001, the lakeside "village" of Port Grimaud has been registered with the label "Twentieth Century Heritage ". This unique housing complex covering 90 hectares represents a total of 2,400 accommodations, over 2,000 berthing places, 7 km of canals, 12 km of docks, 14 bridges including a wooden walkway, as well as 12 islands.

Considered as a real village or a genuine municipality by many, Port Grimaud is actually, a huge co-ownership, but definitely has all the characteristics of a "mini-municipality ", with its own internal regulations.

A Venice in Provence divided in three districts

Historically, Port Grimaud I is the first achievement of François Spoerry and also the largest: 22 hectares of land and 13 hectares of water surface. 1 108 Lots of condominiums, 834 mooring places, including 250 public places reserved for passing boats or year-round tenants.

Port Grimaud I: Managed by the Trade Union Council of Owners

The Trade Union Council of Port Grimaud I represents the owners and makes decisions regarding the management of this private city. It is made up of sixteen volunteer members elected for four years by the owners of the eight neighborhoods of Port Grimaud I.

The Trade Union Council of Port Grimaud pays close attention to the respect of the architectural coherence of the site created by François Spoerry whether it is the choice of the colors of the facades or works that can alter the exterior appearance of the houses or even of the shops. Any modification must be authorized by the Trade Union Association. The city has an association of information and defense of the owners. 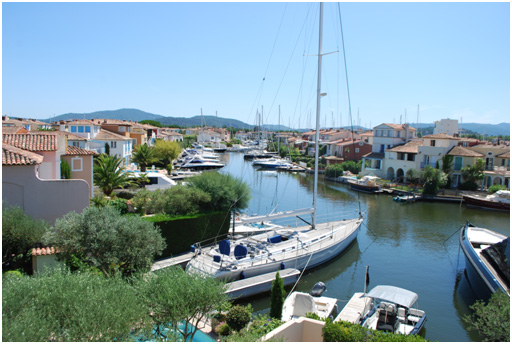 Preservation of the environment and traditions

The quality of life and the preservation of the environment are not forgotten either with a land transport service through electric carts or the maritime transport of the inhabitants which is also totally electric. Green spaces are maintained without chemical agents and selective sorting works effectively in all neighborhoods. The Trade Union Council is equally the guarantor of the maintenance of the traditions of the Lakeside City especially, every 15th of August, the Feast of the sea and the Fishermen which leads to a mass which takes place in the Ecumenical Church of Saint Francis of Assisi, which illuminates the magnificent Vasarely Stained glass windows representing the cycle of the sun. At the end of the ceremony, a procession of boats follows the Priest who aboard a boat, blesses the boats moored along the canals up to the entrance of the port, where he lays a wreath in memory of the missing sailors. Trade Management between inhabitants, boaters and visitors Port Grimaud I welcomes many traders, liberal professions ... on its three main squares: the square of the craftsmen (where Boutemy Real Estate is located), the market square, the square of the six cannons. 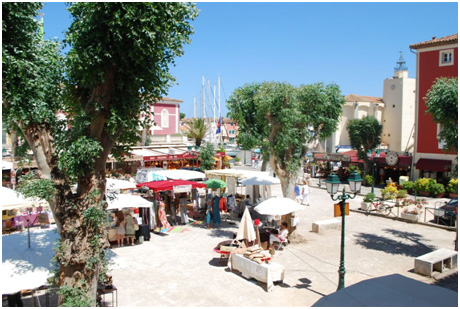 During the summer, fairground markets are held every Thursday and Sunday as well as art markets. Thus, as François Spoerry wished, this condominium is also an area of trade between the land and sea open to boaters.

In a lakeside city such as Port Grimaud, it is faster to move around by boat than by car or by two-wheeled vehicles, which is why water buses, water taxis are made available to Denizens in order to move around the city.

The Grimaldines shuttles enable you to travel to Saint-Tropez by sea from June to September.

To guarantee this harmony between owners, traders, boaters and visitors, certain rules of living well together apply throughout the entire lakeside village: Non-residents are advised to park their vehicles in the external parking lot, which is reserved for them at the entrance to the city, for visits done on foot (motorcycles are also forbidden). Proper attire is requested, compliance to assure peace with the owners is required as well as the respect of the cleanliness of the common areas. The display of laundry in the eyes of passers-by or neighbors is forbidden. Dogs must be kept on a leash. The following are also prohibited inside the city: Rollerblades and skateboards as well as picnics and barbecues. 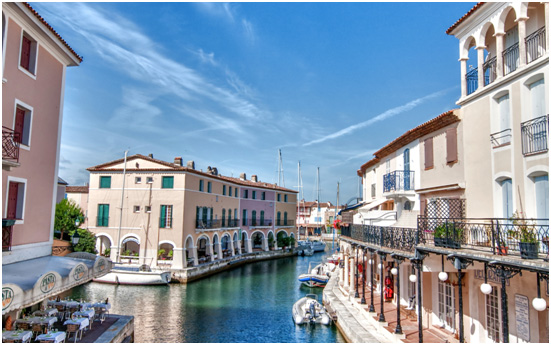