Grimaud and Port Grimaud are part of the same municipality and share the same postal code: 83310 in the Var, on the Côte d'Azur. In reality, Port Grimaud, the lakeside city, is a co-ownership managed in a private way (but open to the public) at the foot of the provincial village of Grimaud.

The history of the hilltop village of Grimaud

There had always been this lack of water and the bridge which was poetically named ' Le Pont des fées' is the trademark of the works which have been constructed by the inhabitants to counter this lack of water.

This is what is called a water bridge, i.e. it is a system which is based on the principle of communicating vessels where the height of the hill behind is the same height as that of the village a little further away.

The challenge given to the men in the 16th century was to create a link from the top of the Hill to the village to get drinking water. It was the goal of the Pont des fées, a wonderful place that served simply to pass this line above a stream called La Garde.

The general problem with the Massif des Maures is that it is a crystalline solid. It has no limestone and it was very necessary to import limestone to construct buildings.

In fact 500 years ago, the poorest people built only their homes with Earth and stones. On the other hand, because of the Pont des fees constructing buildings such as the Castle or church, it was possible to import limestone. This was very expensive and the inhabitants, who have spent some sums of money to build this magnificent monument with stone and lime, realized the importance of water to the village. But because the pressure of the water coming in there was an important and imperative need to protect the pipeline from exploding.

Grimaud, the largest village of the Gulf of Saint-Tropez until the 18th century

Grimaud Castle is not only a strategic place. It is also the symbol of the power of a village which influence extends to the Gulf up till the 17th century, and it was in the middle of the 20th that Grimaud would be out staged by another gulf village: the famous Saint-Tropez.

It is not well known that at that time, the Gulf of Saint-Tropez was called the Gulf of Grimaud.

This explains everything simply because Grimaud, was the most important village of the Freinet. The Freinet is what is now called the Saint-Tropez peninsula. Saint-Tropez, as other villages, was much more modest. There was roughly a quarter of the population and as that of Grimaud, a result the village that gave its name to the Gulf, which is Grimaud.

The village of Saint-Tropez existed in the middle age but in the 14th-century plague, wars and famines made the village disappear just like other villages elsewhere. In the 15th century, the Lord of Grimaud Jean de Cossa realized that this part of the unoccupied peninsula was subject to all sorts of probable invasions and therefore decided to ask Genoese families to repopulate this part of the Gulf to defend the entire coastline.

If you spend a holiday in Grimaud, you'll find at the Tourist Office, located 679 Route Nationale, as well as from many traders, a brochure presenting the main elements of our heritage to admire during your holiday. It is also available for free download here.

The proposed circuit lasts for approximately one hour. From the Saint-Michel’s Church, take Balladou Street and arrive at the Grimaud Castle, from where you can enjoy a magnificent view of the Gulf of Saint-Tropez. Then take Baou Street and stop at the Chapelle des Pénitents. During the tour, you pass by the la rue de la Pompe et le Passage du Crois. You can learn more about the history of the village from the Musée municipal des Arts et Traditions Populaires. 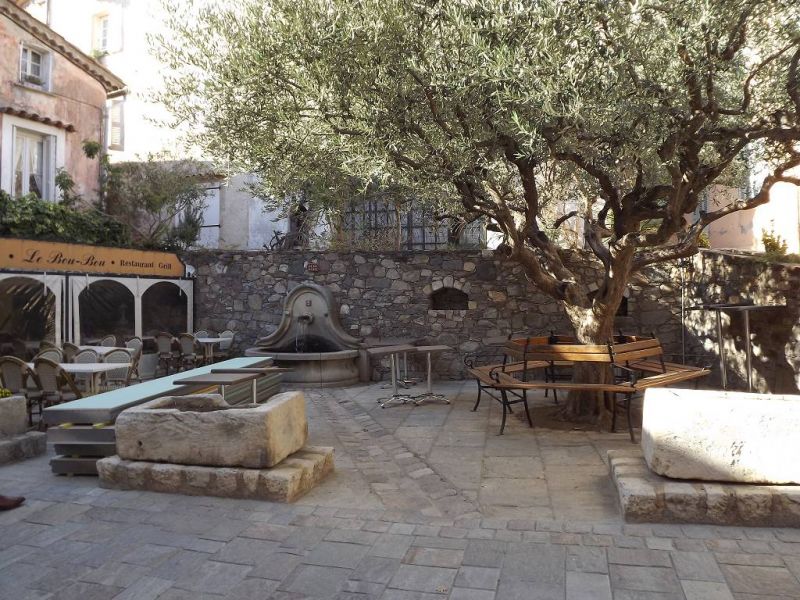 You can stroll, during your leisure time, in the village and if you want to refresh yourself and discover Port Grimaud, you can jump on the little train which leaves from Place Neuve in Grimaud to reach the main entrance of Port Grimaud, North of the lakeside city. The train runs every day from April to October.

The real estate market in Grimaud

Grimaud is one of the most sought-after villages for summer holidays, by the French as well as people from other European countries. This is due to its privileged geographical position between big blue and the beautiful massif des Maures. And of course, its proximity to Saint Tropez which is still as popular and the international jet set also plays an essential role in attracting tourists.

The Allovoyages website published, in July 2014, a study of the most popular resorts and the most expensive ones. The first 4 places were occupied by resorts of the Côte d’Azur: Saint-Tropez was ahead with a minimum of €221 for a two room apartment in a star 3 stars resort. Not far behind, in fourth place, Port Grimaud, the area right by the sea in the village of Grimaud showed a price of € 168.

With such rates, taking a vacation in Grimaud for the week, renting or buying a pied-a-terre for those who have the means can become interesting.

Of course, the rental prices and the per square meter purchase prices reflect the popularity of Port Grimaud, but if you want to stay regularly in Grimaud or spend just one week a year, vacation rentals and purchase opportunities that are offered to you are very interesting.

If you want to rent a house or apartment, we invite you to contact our agency directly at 04 94 56 56 58 and consult our regularly updated website.

In regards to the purchase of an apartment or house in the village of Grimaud, our offers are mainly in Port Grimaud, but sometimes we have some exceptions in Grimaud. They rarely remain on sale for long and sometimes barely even make it to our website. Most of the times, when a homeowner says they want to sell off their property, our first step is to contact potential buyers whom we are in contact and to give them the scoop of the information.

Therefore, here too we invite you to contact one of our realtors, Marion or Yael. If we cannot find the property you are looking for today, we will make it you a priority when we have any available apartment that suits you and give you the information first, even before advertising on the internet.